NFPE
ALL INDIA POSTAL SBCO EMPLOYEES ASSOCIATION
CHQ,1ST FLOOR, NORTH AVENUE P.O BLDG
NEW DELHI-110001.
S.P.Kulkarni                                                                                  S.Appanraj
Presidenet                                                                                    General Secretary
09767687485,09822056791                                                          099442029069
"Succesfull First All India Conference in Hyderabad"
No: Circular /2/AIC/2010 Dtd .15.12.10
"WISH YOU HAPPY & PROSPEROUS NEW YEAR -2011"
Dear Comrades,
I am very glad to put up the Report of First All India Conference of our newly Recognized SBCO Association with your Record break attendance in the history of SBCO associations.
Sucessfully, the maiden conference of our Association was held in Hyderabad on 11.12.10 at SundarayyaVignana Kendra. The Reception Committee headed by Comrade DASV.Prasad the General Secretary of Andhra Circle Postal Co-ordinating Committee had made excellent and elaborate arrangements for the conduct of the first AIC.
As many as 145 delegates and visitors participated in historical conference from circles namely, Andhra, Bihar, Gujarat, Haryana Karnataka, Kerala, Madhya Pradesh, Maharastra, Punjab, Tamil Nadu ,Uttar Pradesh and West Bengal. Himachal Pradesh
Amidst thundering slogans, Com. M. Krishnan the Secretary General of NFPE hoisted the Red Flag. Com. S. Appanraj, President of AIPSBCO EA was on the chair and proceedings were conducted in the presence of com S.P. Kulkarni Working president of AIPSBCOEA& former General Secretary of Indian Postal SBCO Staff Assn. Com Asit Das General Secretary presented the General Secretary’s report. Delegates representing all participating Circles spoke on the important problems of SBCO Employees and elaborately discussed he ways and means to strengthen the organization of our Association.
Great leader of mighty NFPTE, com K.G. Bose and former Vice President of AIPSBCO EA, Com. Krishnadoss (Kerala) were remembered and paid tributes in the session in a fitting manner.
Com M. Krishnan, SG, NFPE had inaugurated the Conference. Our leader portrayed the history of the formation of SBCO wing after bifurcation from Audit andAccounts Department and the present plight of employees owing to so many arbitrary and retrograde changes in the style of functioning. Election of office bearers was conducted smoothly and unanimously.
Com K. Ragavendran, Formerly SG, NFPE took part and graced the conference. In his felicitation address he justified the necessity of formation of a militant union in SBCO wing and has called for mobilization of all SBCO employees under the banner of NFPE and to make the AIPSBCOEA thenumber one union in future.
Com. S.P.Kulkarni Working president of our Association narrated the situation which warranted merging "Indian Postal SBCO Staff Association "with "AIPSBCOEA" in the interest of SBCO employees to get recognized to save SBCO cadre, its identity and declared that the new team will toil for the advancement and betterment of SBCO employees under the banner of NFPE .Under the banner of NFPE we will be involved in all India Policies. Identity of
SBCO as one cadre functioning as internal Audit will be taken up at higher level with the Cooperation of all associations of NFPE federation. Victimization of SBCO at present by the local authorities will be stopped. Implementation of all Court cases decided earlier by the Different Courts will be taken up. He expressed faith in the policy of NFPE federation & the role of all Comrades which will be certainly justified towards SBCO issues. He expressed his feelings for the Support of all SBCO staff to the policy of this association and struggle of 15-16 years without any facility , Recognition which leads us to the Recognition will certainly leads us to the Number one position in the future in SBCO cadre. He assured to the house about non stop struggle up to the achieving this target and demanded to extend this belief, Faith,Support & participation with association activitiesand full support to the newly elected CHQ office bearers. Com K.V. Sridharan GS P3 rendered affectionate felicitation speech . He underlined the role of SBCO in the technological development and cadre restructure which would take place in the near future in Postal department and expressed concern about the dearth of promotion opportunities in SBCO
Besides, many leaders, Com. D.K. Rahate President NFPE; Com. Iswar Singh Dabas G.S. P4; Com. Giriraj Singh GS RIII; Com P.Suresh, G.S. R IV; Com. PranabBhattacharjee G.S. Admn; Com. S.S. Mahadeviah, G.S. GDS Union;Com.R.N.Parashar Assistant Secretary General NFPE; Com.S.RagupathyAssistant Secretary General NFPE and Com. P.Rajanayagam formerly G.S. Postal Accounts have attended and greeted us. All the leaders assured to lend full support for achievement of our demands. Surprising visit of Ms. Karuna Pillai IPS,CPMG A.P.Circle as per her assurance create enthusiasm in the house. The CPMG addressed the house and explain the Role of SBCO and
its participation in new Technology. She discussed with Staff the grievances faced by the staff and assured every type of cooperation.
Amendments to the constitution of our association and Resolutions were passed.
The monthly subscription of members has been revised as Rs.30/- with immediate effect.
A separate Open Session marking the occasion of the NFPE Federal Executive, the first AIC of our SBCO Employees Association and Postal Civil Wing Employees Association was also held in the big auditorium of the venue in which besides the leaders of NFPE several leaders of Central Trade Unions and sister organisations addressed.
Resolutions:

The following resolutions were unanimously adopted:

1.     The Savings Bank Control Organization (SBCO) was formed in 1961 replacing the maintenance of Duplicate Accounting System in erstwhile P&T Audit Office. First, Savings Bank accounts were decentralized from Audit and sent to SBCO of the respective Head Post Offices. This system was introduced as an internal Audit & Accounts in the HPOs under the control of Accounts Officer, ICO SB) of the respective Circle Offices. Granting of Earned leave, transfer and writing of Confidential Reports were responsible for attendance of the staff of
SBCO and grant of casual leave and Divisional Heads are entrusted with passing of T.A. Bills and Medical claims. The SBCO Branch at the HPO was functioning as an independent Unit doing accounting and auditing work in respect of SB Accounts. The main purpose of the introduction is to ensure
that the existing balance accounts of H.O. and its S.Os as a whole is agreed at least once in a year
a.     and there is no leakage of revenue. During the year 1966, the work of Cumulative Time Deposit Accounts was transferred from P&T Audit Office to the SBCOs without providing any extra staff to look after that work. Though the SBCOs was introduced in 1961, no norm for the work was evolved till October 1965 in respect of SB and in respect of CTD till January 1975. This resulted in enormous arrears in CTD work. Recurring Deposit Scheme was introduced on 01.04.1970 and Time Deposit Accounts was also introduced in the year 1970. PPF scheme was introduced in 1979, MIS & NSS 87 was introduced in 2004 and the SBCO was entrusted with the work of accounting/auditing of the schemes without providing additional staff strength to the SBCO as and when new schemes were introduced. The arrears in RD work accumulated along with the CTD arrears and the staff could not manage the work load thrust upon them. This was the position all over India from 1968 to till date. The Department tried to wipe out the arrears by granting OTA to the existing staff and by forming arrears clearance squads. This did not bring the desired result. In the meantime the administrative control of the SBCO staff such as writing of C.Rs and disciplinary powers were transferred from Accounts Officer ICO (SB) to the Divisional Superintendents during the year 1978. The SBCO was formed mainly to monitor and assist the operative work of SB Branch by raising objections against the mistakes committed by the SB Branch staff and the Sub Office staff. The individuality of the
SBCO branch was slowly eroded and the Administrative Officers from Apex level to lower level began to
b.     consider this branch as an unwanted appendage. After decentralization of RD & MIS accounts, the position began much worse and the SBCO branch                                                was converted as an operative branch and the staffs are being coerced to do posting work that was being done by SB Branch of HPOs. The main purpose for which the SBCO was formed was completely forgotten by the Administration and its importance was slowly whittled. The in-charge of SBCOs in most of the HPOs has to tow the line of their Divisional Head and so their function as an independent Divisional Heads and Regional PMGs are now penalizing the SBCO staff for the frauds committed in Sub Offices and Branch Offices in the guise of contributory negligence that too after the necessary decentralization of RD & MIS accounts. The positions of staff are being grossly ignored while the imputations are framed against the SBCO staff. The staff of postal Accounts are not penalized for any frauds committed in savings Certificates though the accounting/auditing of the same is entrusted to that office. The Department should not apply different standards for imposing recoveries and the SBCO should not be penalized for the frauds committed by the S.Os & B.Os. This Union requests the Secretary, Department of Posts to study the issue in depth and take necessary measures to prevent the continuous harassment of SBCO staff immediately

The AIC elected the following Office Bearers unanimously for the ensuing term.

The historic decision taken at Delhi by the All India Leaders about merger of two SBCO associations one, Indian Postal SBCO Staff Association struggling since 15-16 years ,which was deprived from Recognition due to pending Different Court cases and struggling to save SBCO and another newly formed All India Postal SBCO Employees Association under the banner of NFPE ,has proved land mark in the history of SBCO. The Decision of All India leaders Firmly supported by the All Circles it is reflected through the Verification Process as this New Association
get Recognized with 20 % membership and proved that all SBCO staff wants to join main Stream, with NFPE and proved confidence with the leadership who has taken the decision of Merger of both SBCO Association and to join with NFPE the strongest Federation in the Department of Posts. Over all these the Record break attendance for the very first All India Conference has encouraged the CHQ leaders to fight for number one position in SBCO cadre and to maintain its identity with their firm policies for the betterment of SBCO staff.
From the first conference, we have derived good inspiration to build a stronger union in SBCO wing. We shall strive with dedication and sincerity to ventilate all problems of the employees of SBCO in particular utilizing all platforms of negotiations available for recognized Associations including the JCM Departmental Council under the great banner of the historical NFPE Federation. Unity is strength and therefore it is clear that the advancement of SBCO employees can be achieved only by uniting with the entirety of the Postal Employees belonging to various cadres. We are not alone; We are part and parcel of the mighty NFPE Federation and with all the strong affiliated Organizations of the Federation. Here commences our onward and united march towards progress and achievements. 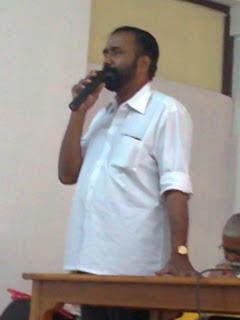 Posted by All India Postal SBCO Employees Association-S.P.Kulkarni, President at 5:46 AM No comments: 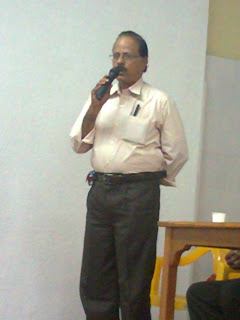 Posted by All India Postal SBCO Employees Association-S.P.Kulkarni, President at 5:45 AM No comments: 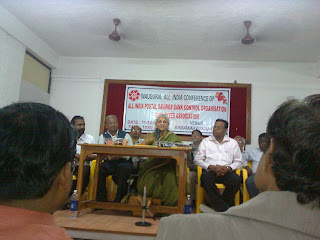 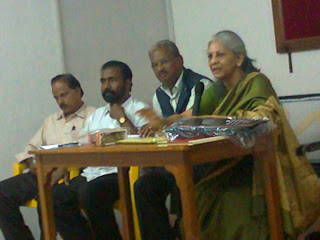 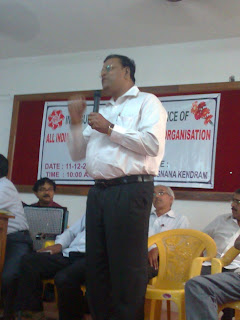 Posted by All India Postal SBCO Employees Association-S.P.Kulkarni, President at 5:43 AM No comments:

NOTE- ALL Delegates may report Reception Committee Address.Arrangments are made on the address belllow-

Delegates Arriving At Secundarabad- Railway Station- Bus No 40 or Bus No-1 to the above Address.

Delegates Arriving at EMLIBAN BUS Station Hyderabad- Bus No-1 up to the above Address.

--- By S.P.Kulkarni.Working President.AIPSBCOEA.
Posted by All India Postal SBCO Employees Association-S.P.Kulkarni, President at 6:43 AM No comments: