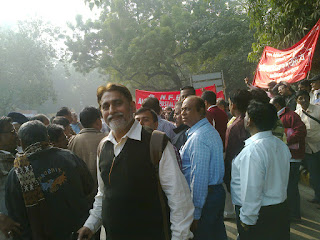 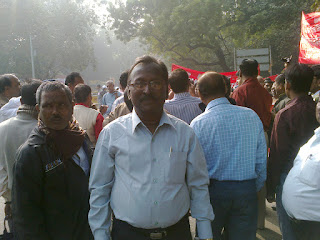 Posted by Appanraj S - Vice President at 7:22 AM

MARCH TO PARLIAMENT AGAINST PFRDA

Thousands of State Government Employees, Central Government Employees belonging to NFPE and Confederation, Railways, Defence and BSNL assembled at Jantar Mantar before Parliament to demand withdrawal of PFRDA Bill tabled at Parliament.
Leaders of all the Organising Organizations along with Comrades Basudev Acharya M.P and Tapen Sen M.P met the Hon'ble Prime Minister of India and urged for withdrawal of PFRDA Bill
Laksh of signatures collected all over the country are gathered and the same will be submitted to the Hon'ble Prime Minister of India.
All the Leaders addressed the Rally and called for intensification of struggle until the PFRDA is scrapped.
Comrades, Our struggle will continue to save statutory pension.
With greetings,
Appanraj.S. General Secretary
Posted by Appanraj S - Vice President at 10:46 PM No comments:

Resolutions adopted in Central Working Committee meeting of AIPSBCOEA held at New Delhi from 20.10.11 to 21.10.11
The Central Working Committee meeting of AIPSBCOEA was held at New Delhi from 20.10.11 to 21.10.11. The following resolutions were passed unanimously. It is decided to urge the Department for settling of the problems enumerated in the following Resolutions of the staff working in SBCO immediately.
1.      Savings Bank Control Organization in the Department of Post was decentralized from erstwhile P and T audit office. SBCO should be regarded as an audit wing of Savings Bank and be given status equal to Postal Accounts on all aspects as its functions and the responsibilities are synonymous. The staffs of SBCO are in fact exercising that decentralized audit and accounts duties and their work actually start after the accounting of the transactions. Therefore, imposing recovery of loss irrationally fixing contributory negligence on them for frauds committed in Savings Bank in Post Offices must be given up.
2.   Request for reevaluation of the issue of administrative control of SBCO staff to ensure independent and proper functioning of SBCO Branch. The powers of writing of CR should be vested with Accounts officer ICO(SB) as they are the next supervisory officer with full knowledge of the functioning of SBCO Branch and its procedures.
3.   Transfer liability in SBCO cadres may be modified and restricted to Divisional level to mitigate the hardship at par with Accounts line officials in Post Offices who also belong to circle cadre like SBCO staff.
4.   After decentralization of RD, MIS and SCSS categories, maintenance of duplicate ledgers of these categories was entrusted to SBCO which is quite irregular as it constitutes operative work. The operative work should be de-linked from SBCO as SBCO has to perform the Audit work of these categories. Both the duties performed by the one organization are not meaningful. As a result very functioning of SBCO i.e, checking of vouchers has been affected very much and frauds occur liberally in these schemes in Sub/Branch offices. It is therefore requested to cause orders for maintenance of ledgers of RD, MIS and SCSS by the staff of SB Branch in Head post offices in Sanchay Post version.
5.   Vacancies of PA, SBCO in all circles needed to be assessed on a war footing and the posts sanctioned after review along with the existing vacancies should be filled up immediately.
6.   When SB allowance was introduced to the PAs of the SB branch, the staff of SBCO remained in LDC/UDC cadres. Since 1991, the nomenclature of LDC/UDC was replaced as PA SBCO and there is no difference in pay scales between PA and PA SBCO. Considering the similarity in cadre, pay scales and increase of work load owing to addition of much new type of works, grant SB allowance to the staff working in SBCO should be considered in earnest.
7.   In the proposed introduction of Core Banking Solution in Postal Savings Bank, utmost care should be taken for authenticity of balance in Savings Accounts. Only the accounts with certified balances should be transferred to CBS. The RD accounts may not be included in CBS , since the ledger maintenance of this category has been derailed in all levels right from its inception.
8.   The proposal of cadre review put forth by National Federation of Postal Employees may please be expedited without further delay.
Posted by Appanraj .S   G/s
Posted by Appanraj S - Vice President at 11:17 PM 1 comment:

Interest rates on post office savings schemes up
In a bid to lure millions of small savers who had exited the National Small Savings Fund (NSSF) schemes in pursuit of higher returns, the government on Friday raised the interest rates on post office savings account (POSA), time deposit schemes of various tenures, monthly income scheme (MIS) and Public Provident Fund (PPF).
According to a Finance Ministry statement here, while the interest rate on POSA stands increased to four per cent from 3.5 per cent for the current fiscal, deposits into schemes such as MIS and PPF will fetch attractive returns of 8.2 per cent and 8.6 per cent respectively, as compared to the existing interest rates of eight per cent.
While all time maturities will fetch significantly better returns by way of higher interest rates than hitherto, the biggest gainer is set to be the one-year fixed deposit scheme with its interest rate pegged at 7.7 per cent as compared to the prevailing 6.25 per cent.
As per the decision approved by Finance Minister Pranab Mukherjee, the new rates are to be made applicable from the date of notification to be announced soon.
The move to make the small savings schemes more attractive and align them with current market rates is in line with the recommendations of Shyamala Gopinath Committee which was set up to look into the matter, as was advised by the Thirteenth Finance Commission.
New NSC instrument
Alongside, however, the government has decided to discontinue the Kisan Vikas Patra (KVP) scheme.It has also reduced the maturity period for MIS and National Savings Certificate (NSC) schemes to five years from the existing six years and has introduced a new 10-year NSC instrument with its interest rate pegged at 8.7 per cent.
Another bonanza for small savers is that the annual investment ceiling in PPF savings accounts has been raised to Rs. 1 lakh from the current limit of Rs. 70,000.
At the same time, what may irk investors is that loans against such savings would be at a higher interest rate of two per cent as against one per cent at present.
The government has also scrapped the five per cent bonus on maturity of MIS schemes and abolished the commission for agents on PPF and Senior Citizens Savings Schemes.
·  Interest rate on post office saving account up to 4% from 3.5% ·  That on MIS and PPF raised to 8.2% and 8.6% respectively
Source: The Hindu 12.11.11
Posted by Appanraj.S   Genl. Secretary
Posted by Appanraj S - Vice President at 5:59 PM No comments:

Phone: 011-23743667  Email: postaljcm.staffside@gmail.com
JOINT CONSULTATIVE MACHINERY
POSTAL DEPARTMENTAL COUNCIL
(STAFF SIDE)
D-2 Telegraph Place, Bangal Sahib Marg, New Delhi - 110001
Leader: K. V. Sridharan                                                       Secretary: Giriraj Singh
Ref: JCM/DC/2011                                                                               Dated – 28.09.2011
To,
The Chairman
Postal Departmental Council JCM
Dak Bhawan
New Delhi - 110001
Sub: -     Subjects for discussion from the Staff side in the meeting of Departmental Council JCM
Ref: -   Your letter No. 6/02/2011-SR dt. 13.09.2011
Sir,
The list of new subjects which contains the subjects not discussed in the last meeting and also the new subjects in two annexures for discussion in the ensuing meeting of Postal Departmental Council Meeting of the Joint Consultative Machinery is enclosed herewith in Triplicate.
With kind regards,
Yours faithfully,
(Giriraj Singh)
Secretary – Staff Side
Transfer liability of the staff  of SBCO
As assured during the talks, transfer liabilities to SBCO staff may be restricted to divisional level in order to mitigate the hardship due to transfers after completion of tenure.
Stop penalizing the SBCO employees by imposing recovery of loss irrationally for frauds committed in the savings schemes in sub/branch offices.
The staffs of SBCO are actually exercising the decentralized audit and accounts duties and their work actually start after accounting of the transactions. Whereas, in many cases they have been proceeded with charges under contributory factors for recovery of loss sustained to the department. It is requested to cause necessary orders protecting the SBCO staff.
Request for change in the MACP Rules to grant financial up gradation to the promotees:
Now the procedure followed in MACP to consider all promotions obtained through competitive examinations also as regular promotions and thereby reducing the number of available financial up gradation, is causing discrimination between the direct recruits and promotees. If a Group D official gets promotion as Postman by competitive examination and then PA by another competitive exam he will get only once a financial up gradation as against three to his counterpart “direct recruits” in that cadre. Hence suitable action is requested to make changes in the MACP rules for grant of three financial up gradations to the promotees in our department because the promotions in our department are competitive in nature unlike qualifying examinations in other departments.
Recovery of Huge amounts from the officials in the name of contributory negligence:
The Directorate has issued instructions Vide DG No 14013/03/2010-VP dated 22-06-2011 to the Heads of Circles on the above subject. But here is no impact of the orders on the Disciplinary authorities and the harassment of recoveries continues and the allegations are flimsy in nature. Actually the Divisional heads and inspecting officers are contributing for the frauds in Sub offices after decentralization of SB work and misappropriation of Govt. Money. But the officials at Head offices are charge sheeted and amounts recovered arbitrarily severally making them incapacitated. The officials on the verge of retirement are the scapegoats as they are forced to credit the amounts to get their pensionary benefits. In most of the cases the charge sheeting authority is directly responsible for the contributory negligence and the CLI/RLI supports the authorities only. The appeals and petitions did not help the aggrieved and in no case they were disposed in a practical perspective. The main offenders were dealt with casually and before proceeding against the main offenders action is being initiated against the subsidiary offenders.
We request for issue of speaking orders on the subject in detail to safe guard the innocent and frustrated officials.
Non adherence to the DG orders in reconsidering the bench Mark for promotion to MACP:
A kind reference is invited to the DG letter No 4-7/MACPS/2009-PCC dated 01-09-2010, wherein instructions have been issued to the circle to constitute Scrutiny Committee to review the bench mark for promotion to the MACP II and III. Circles like A.P. J&K the bench mark were not reviewed and the scrutiny committees stick to the old benchmark against the spirit of the orders and many officials did not get the promotion.LSG, but not considered for the promotion to MACP. The officials promoted to the MACP were placed in the Pay Band I instead of Pay band-II, though clarification was already issued by the DOP&T and Department.
Clarificatory orders are requested.
Appanraj .S
General Secretary
Posted by Appanraj S - Vice President at 10:21 AM No comments: