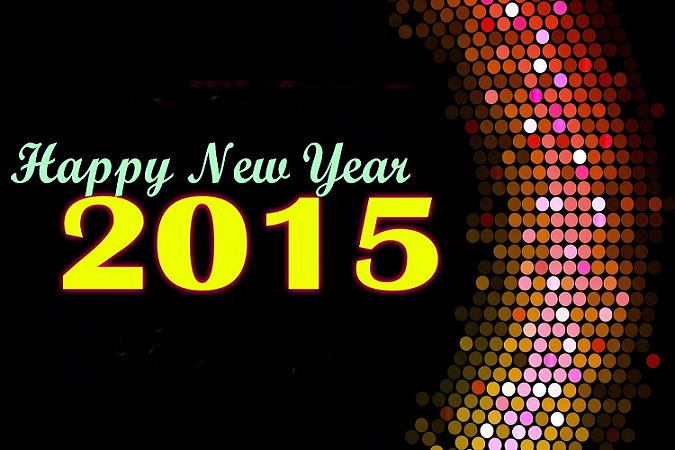 Posted by Virendra Tewary at 9:50 PM No comments: 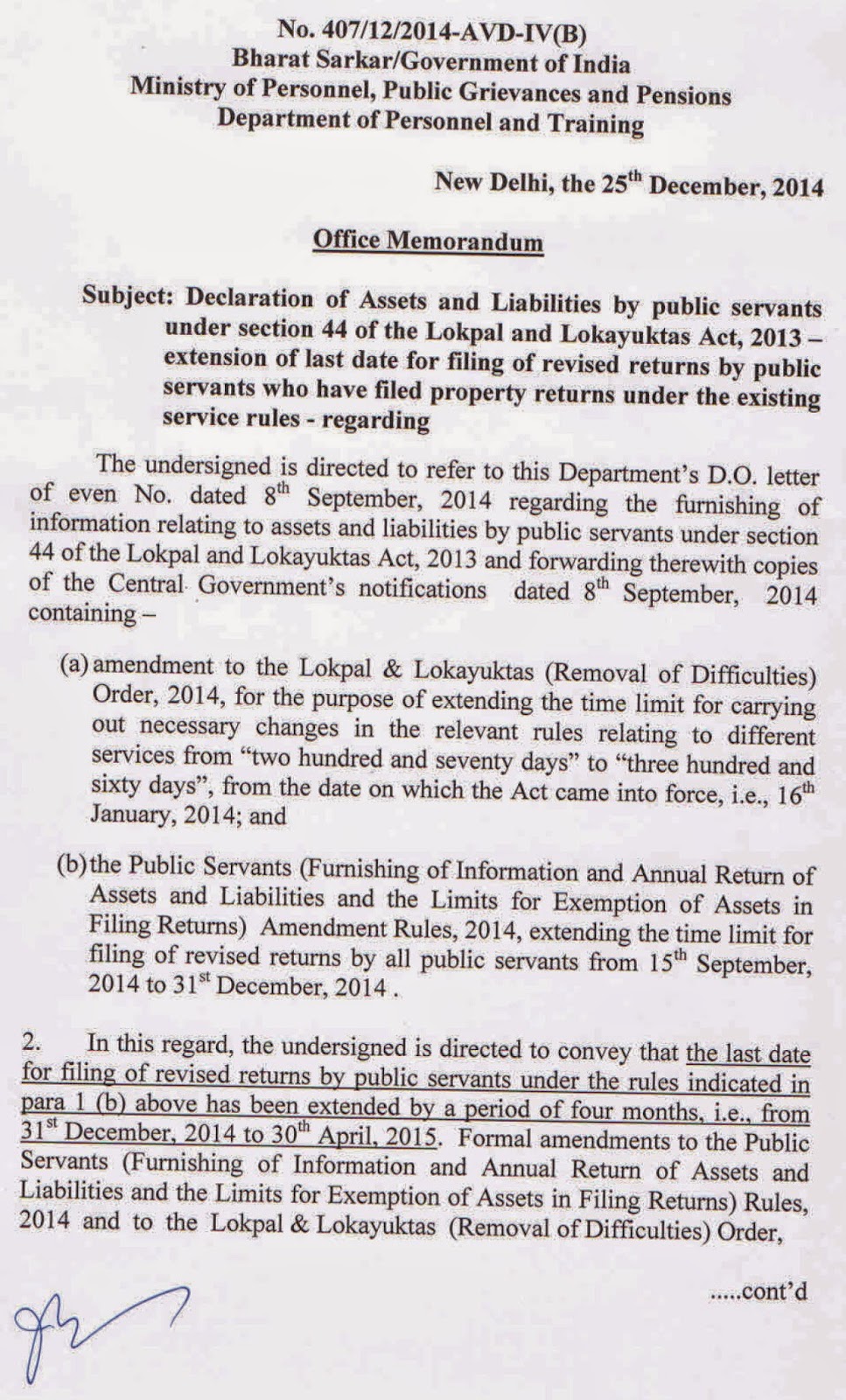 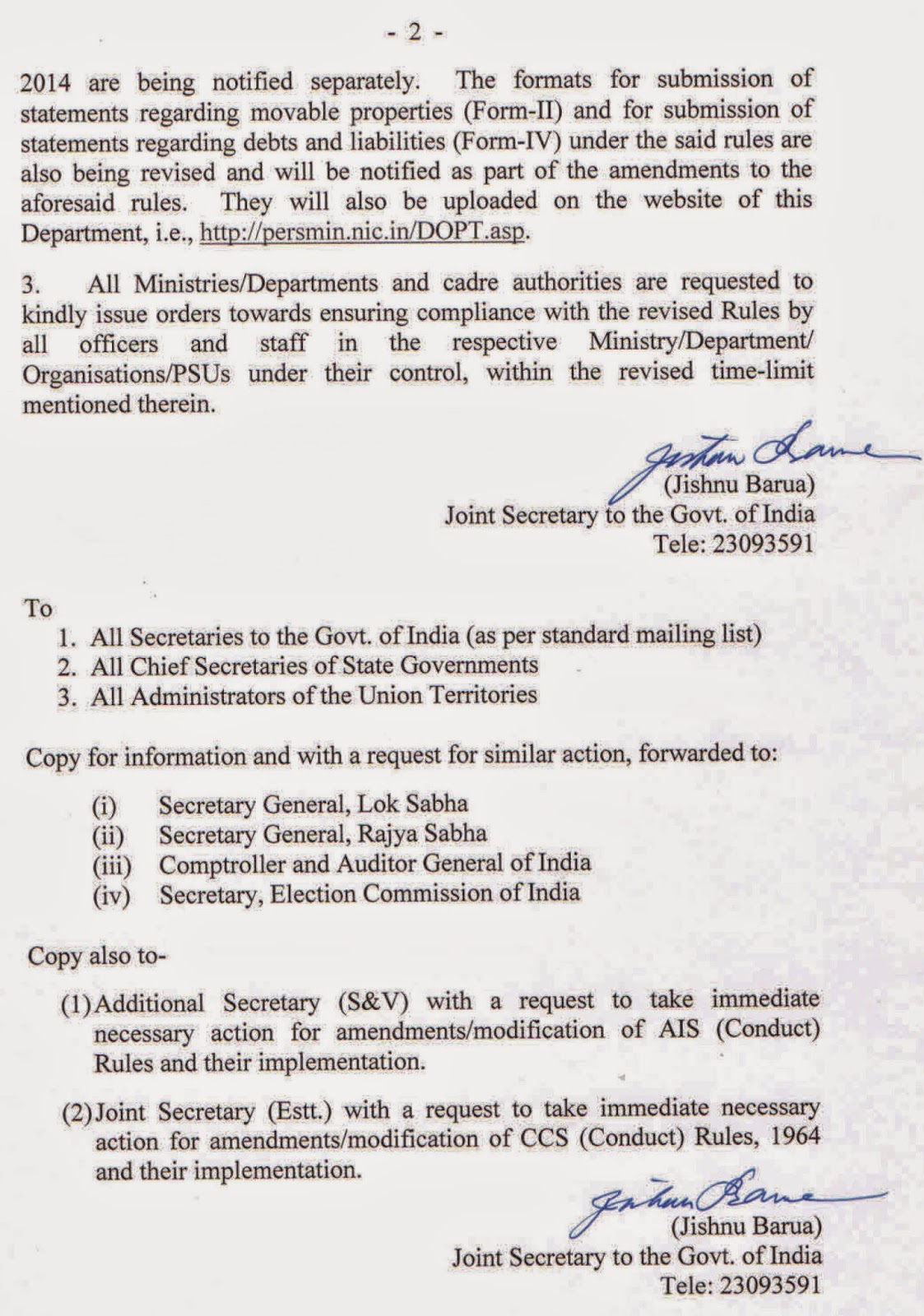 Posted by Virendra Tewary at 5:06 AM No comments:

NEW DELHI: Recovery of excess amount paid to Class-III and Class-IV employees due to employer's mistake is not permissible in law, the Supreme Court has ruled saying that it would cause extremely harsh consequences to them who are totally dependent on their wages to run their family.
The apex court said employees of lower rung service spend their entire earning in the upkeep and welfare of their family, and if such excess payment is allowed to be recovered from them, it would cause them far more hardship, than the reciprocal gains to the employer.
A bench of JS Khehar and Arun Mishra also directed that an employer cannot recover excess amount in case of a retired employee or one who is to retire within one year and where recovery process is initiated five years after excess payment.
"We are therefore satisfied in concluding, that such recovery from employees belonging to the lower rungs (i.e., Class-III and Class-IV - sometimes denoted as Group 'C' and Group 'D') of service, should not be subjected to the ordeal of any recovery, even though they were beneficiaries of receiving higher emoluments, than were due to them. Such recovery would be iniquitous and arbitrary and therefore would also breach the mandate contained in Article 14 of the Constitution," Justice Khehar, who wrote the judgment said.
It said that the employer's right to recover has to compared, with the effect of the recovery on the concerned employee and if the effect of the recovery from the employee would be, more unfair, more wrongful, more improper, and more unwarranted, than the corresponding right of the employer, which would then make it iniquitous and arbitrary, to effect the recovery.
"In such a situation, the employee's right would outbalance, and therefore eclipse, the right of the employer to recover," the bench said.
The bench passed the order on a petition filed by Punjab government challenging Punjab and Haryana high court order restraining it to recover the excess amount paid by mistake to numerous employees over the years.
It said we may, as a ready reference, summarize the following few situations, wherein recoveries by the employers, would be impermissible in law:
(i) Recovery from employees belonging to Class-III and Class-IV service (or Group 'C' and Group 'D' service).
(ii) Recovery from retired employees, or employees who are due to retire within one year, of the order of recovery.
(iii) Recovery from employees, when the excess payment has been made for a period in excess of five years, before the order of recovery is issued.
(iv) Recovery in cases where an employee has wrongfully been required to discharge duties of a higher post, and has been paid accordingly, even though he should have rightfully been required to work against an inferior post.
(v) In any other case, where the Court arrives at the conclusion, that recovery if made from the employee, would be iniquitous or harsh or arbitrary to such an extent, as would far outweigh the equitable balance of the employer's right to recover.
The court said a government employee is primarily dependent on his wages, and such deduction from salary should not be allowed which would make it difficult for the employee to provide for the needs of his family and any recovery must be done within five years.
In this case, the employees were given monetary benefits in excess of their entitlement due to a mistake committed by a concerned competent authority, in determining the emoluments payable to them.

Posted by Virendra Tewary at 4:49 AM No comments: 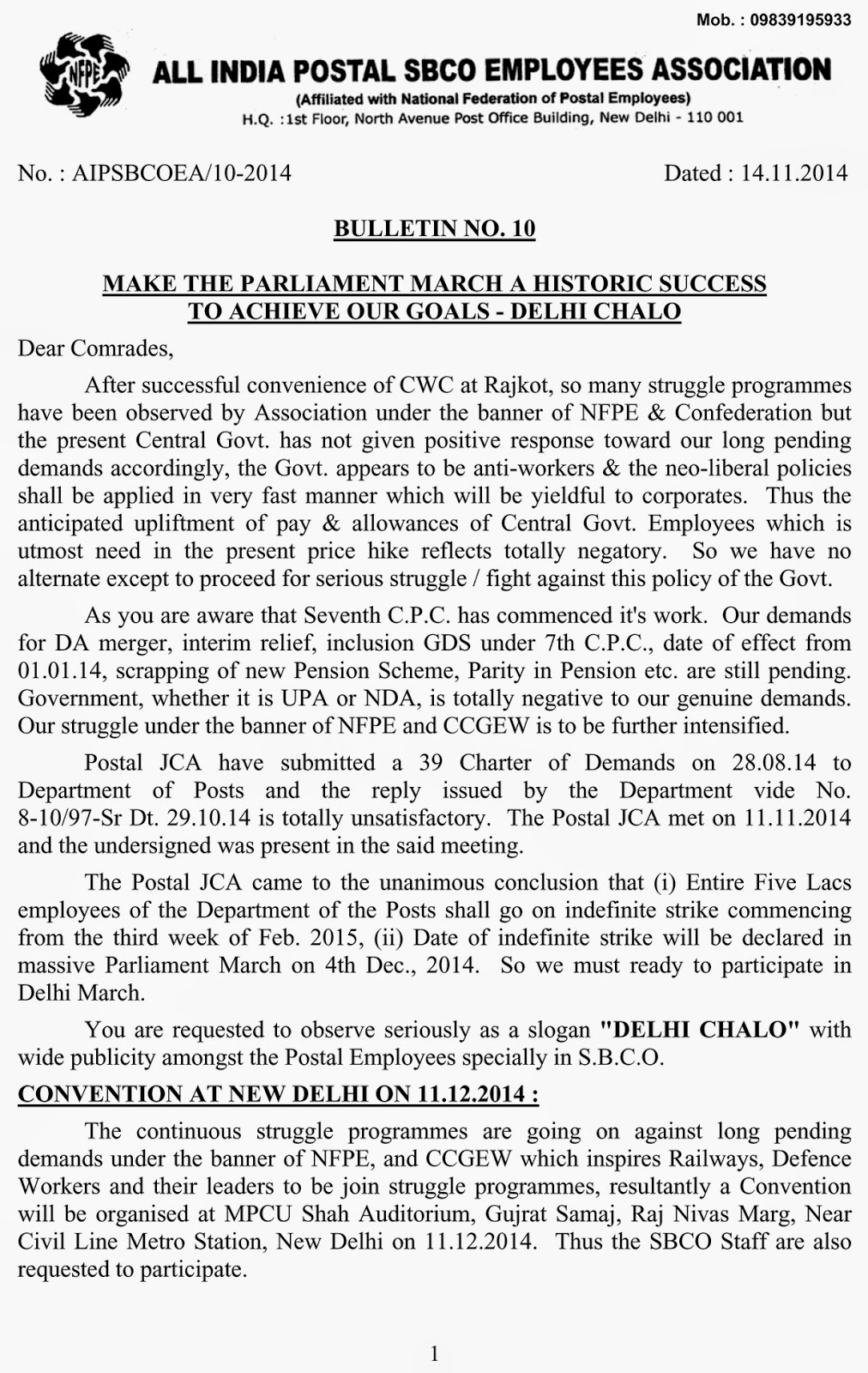 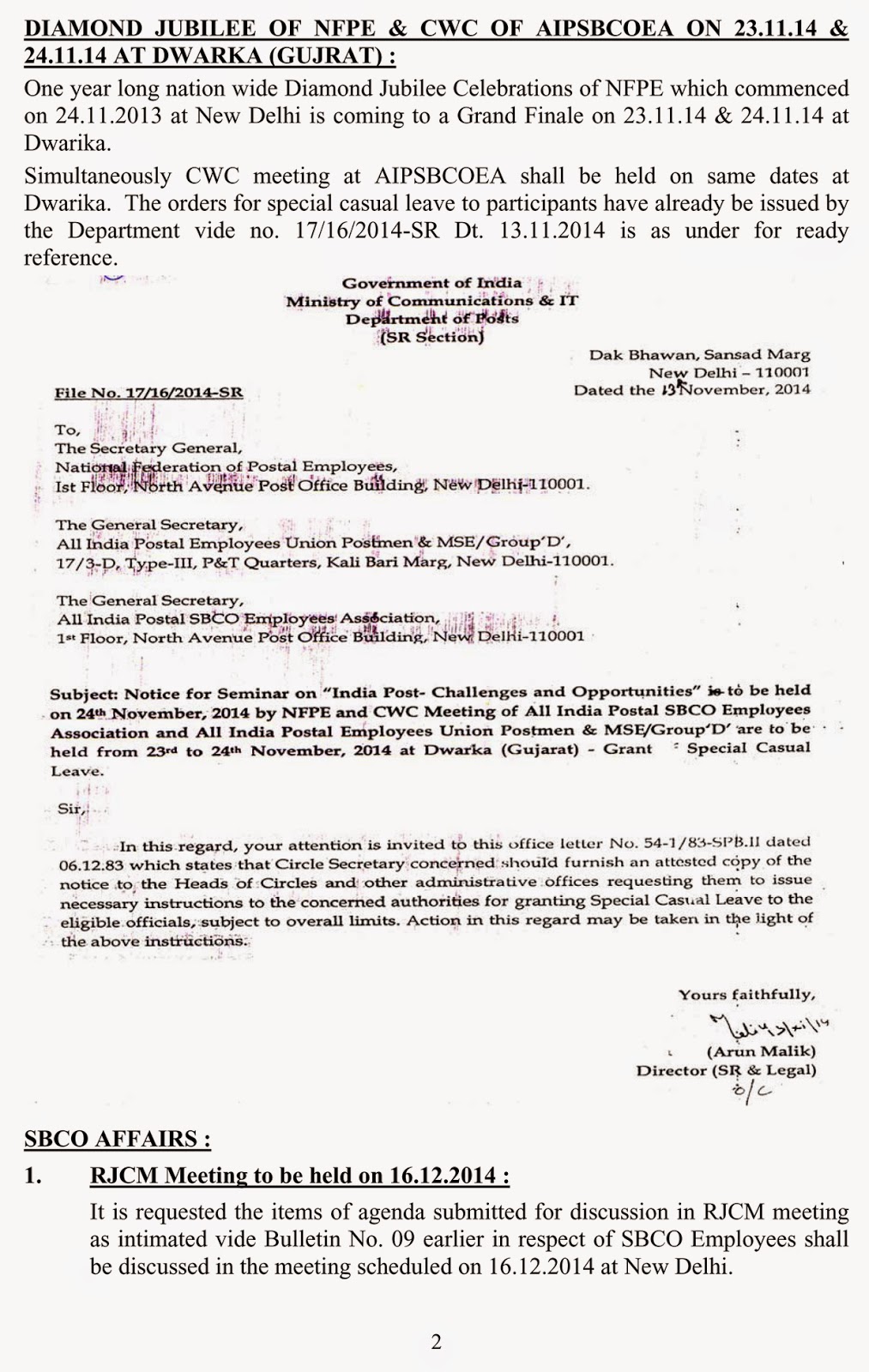 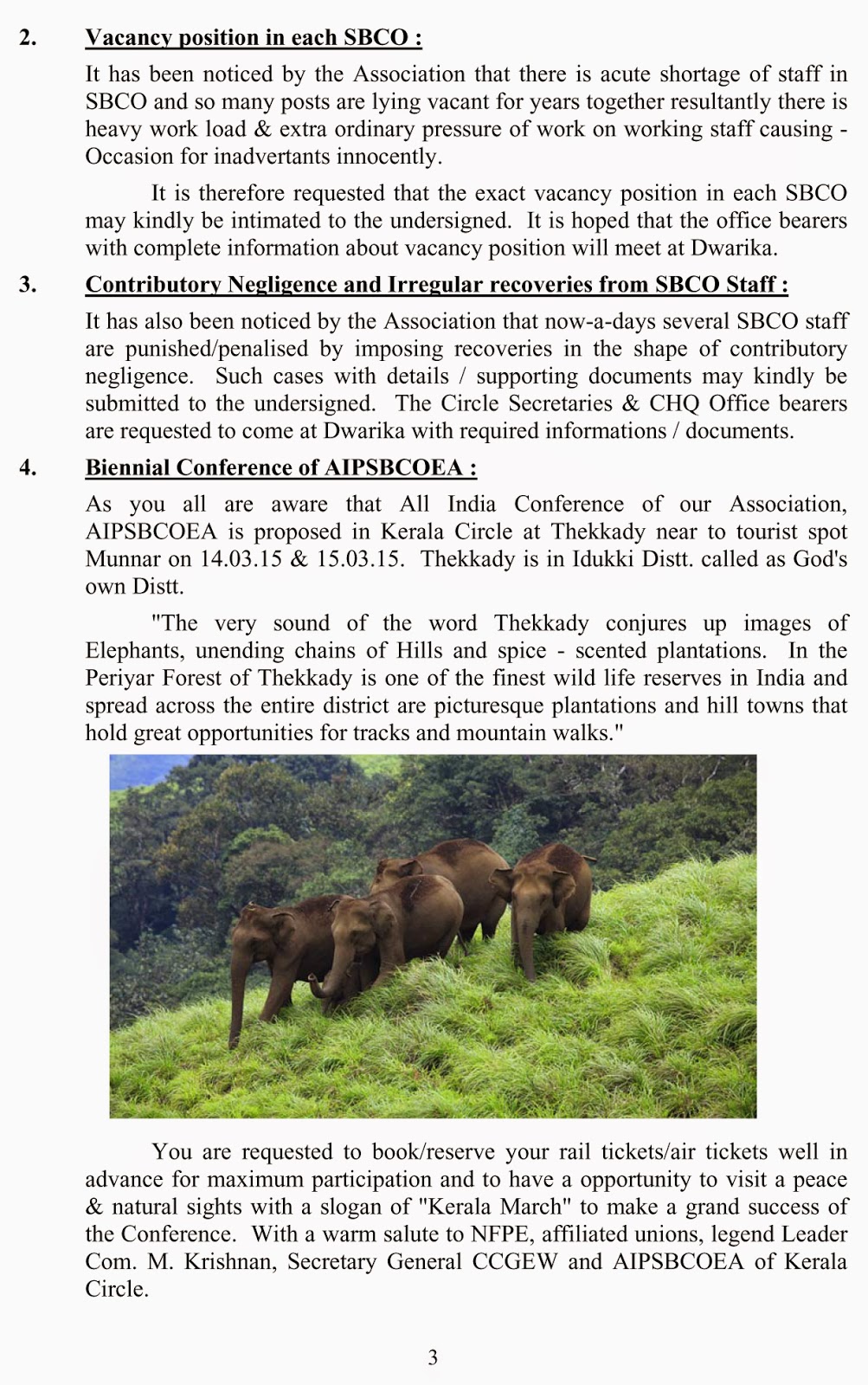 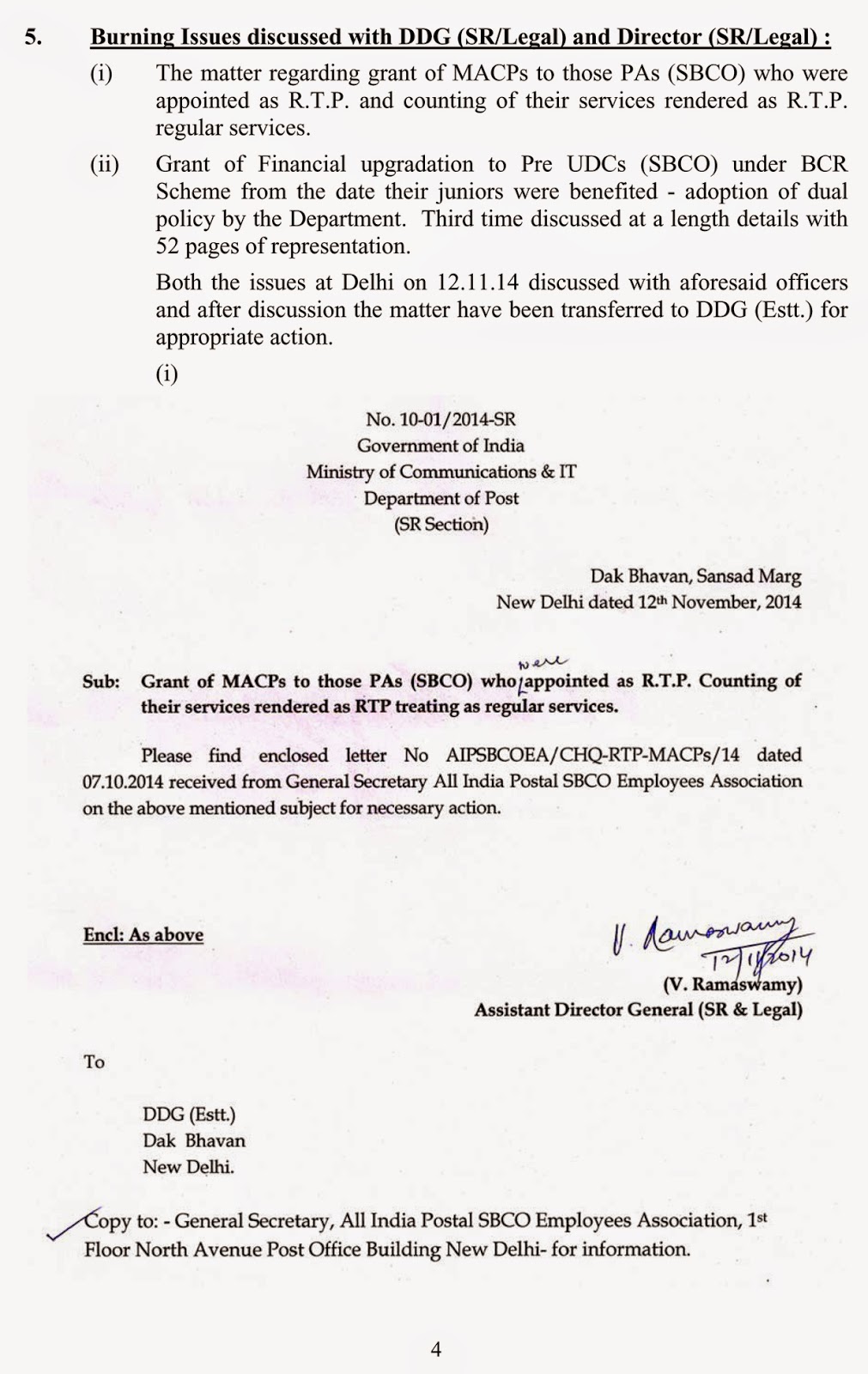 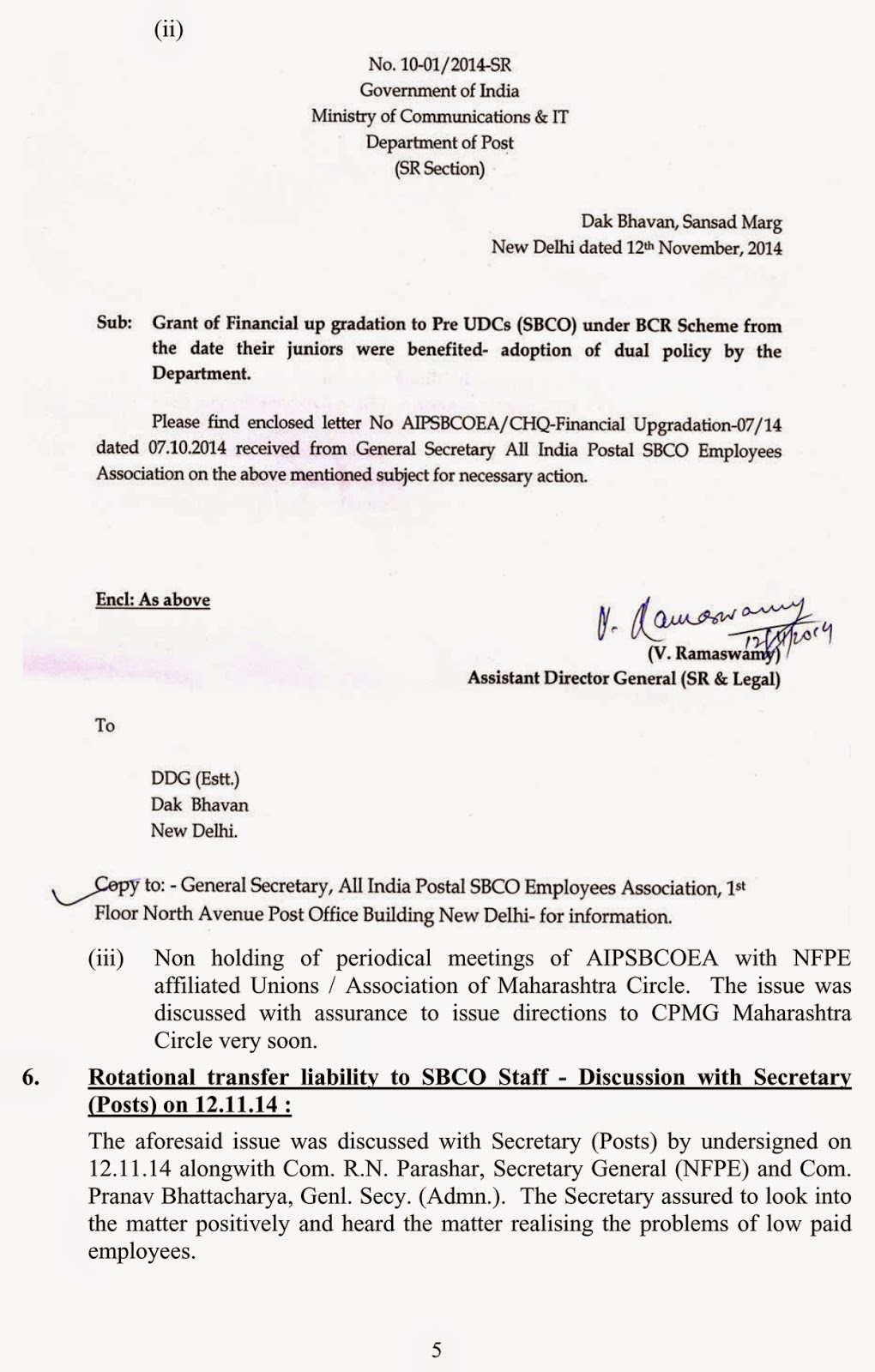 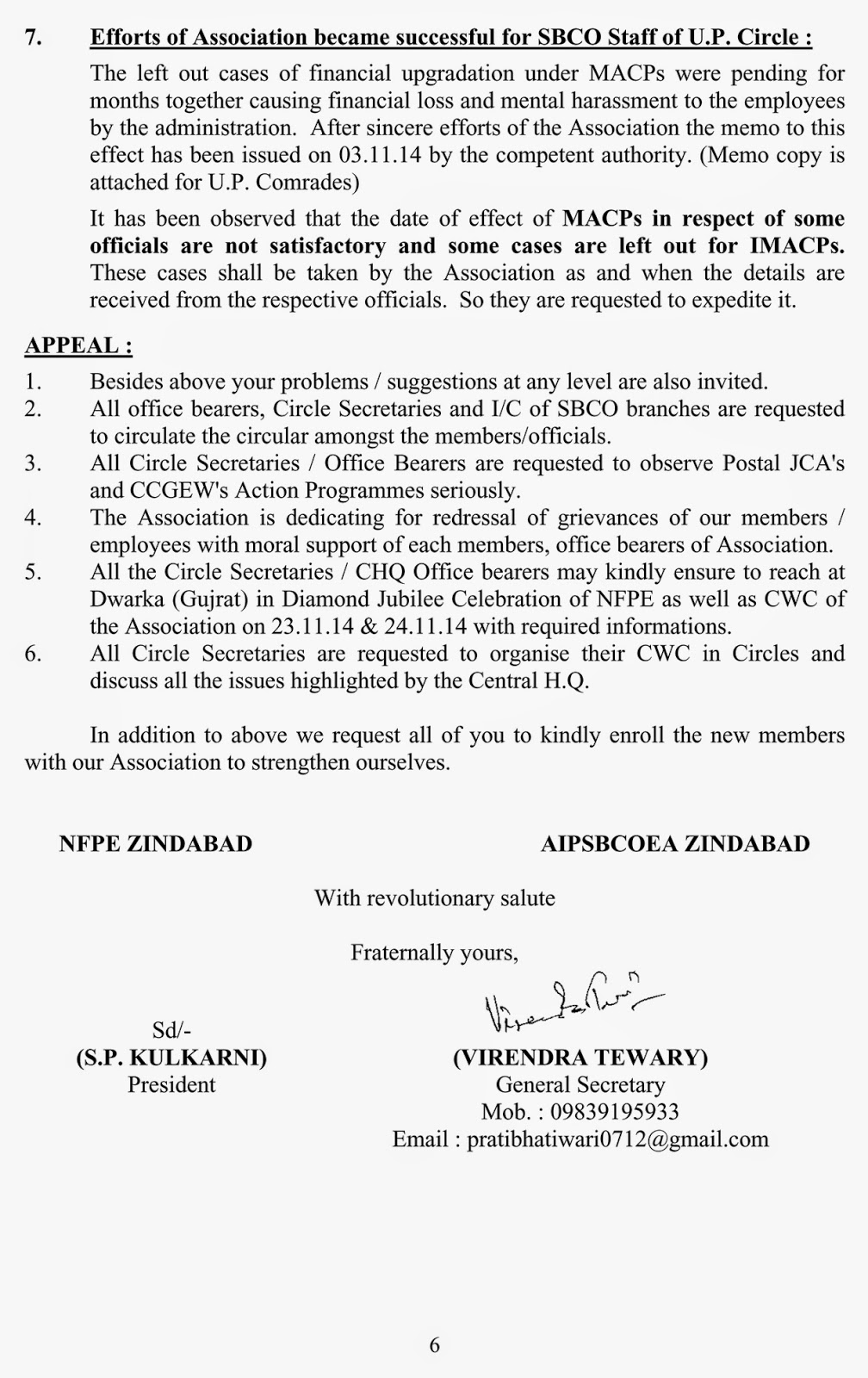 Posted by Virendra Tewary at 5:20 AM No comments:

PARLIAMENT MARCH DATED 04.12.2014
ORGANIZED BY POSTAL JOINT COUNCIL OF ACTION
CONSISTING
NATIONAL FEDERATION OF POSTAL EMPLOYEES (NFPE)
FEDERATION OF NATIONAL POSTAL ORGANIZATIONS (FNPO)
AIPE UNION GDS (NFPE)
NATIONAL UNION GDS
ALL WILL ASSEMBLE AT JANTAR MANTAR NEW DELHI IN FRONT OF POLICE POST TOWARDS PARK SIDE. FROM THERE MARCH WILL START AT 10.30 AM TOWARDS PARLIAMENT.
Posted by Virendra Tewary at 3:38 AM No comments: