CENTRAL WORKING COMMITTEE MEETING AT PURI, ODISHA ON
19th & 20th NOV., 2017
Dear Comrades,
The Central Working Committee Meeting of the AIPSBCOEA was held at Gundicha Bhakta Niwas, Puri, Odisha from 19th & 20th Nov., 2017 which was organised in a very grand manner by Odisha SBCO Comrades co-ordination with NFPE leaders of Odisha Circle.
The high profile leaders of CCGE&W & NFPE were present in the meeting viz. Com. M. Krishnan, Sec. General CCGE&W, Com. R.N. Parashar, S/G-NFPE, Com. Giri Raj Singh, President, NFPE with local NFPE leaders.
The representative of Association from all Circles have graced the CWC in a large numbers with delegates and participated in length debate & discussion on SBCO issues to save our separate identity by dedication to the extent of struggle action programmes.
The photographs of important events witnessed for CWC are as under : 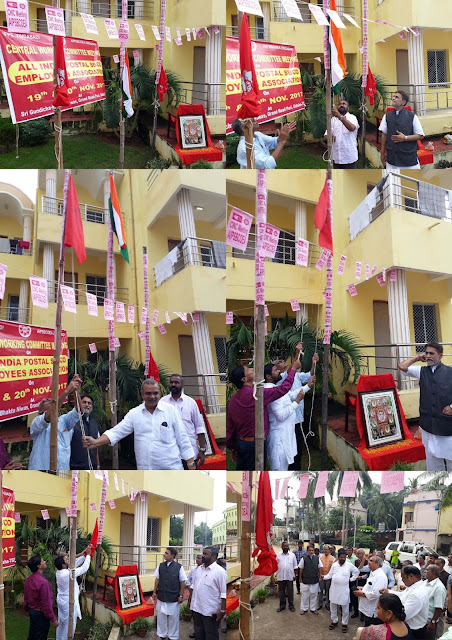 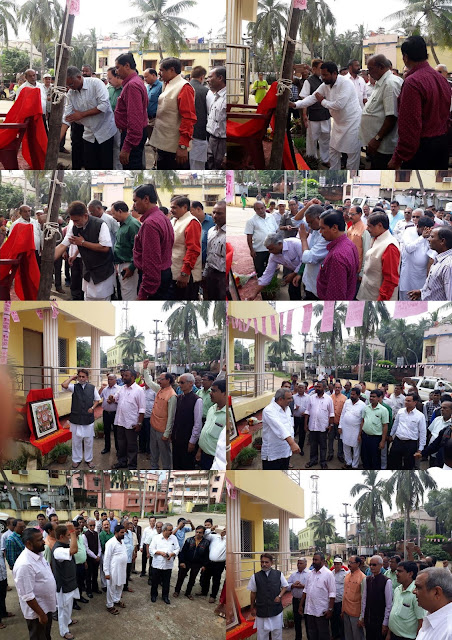 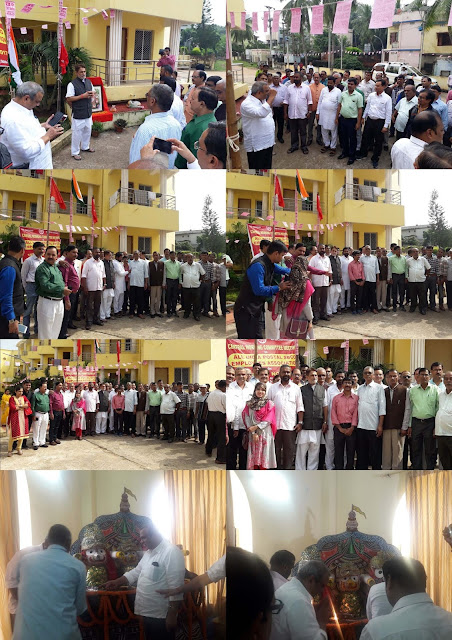 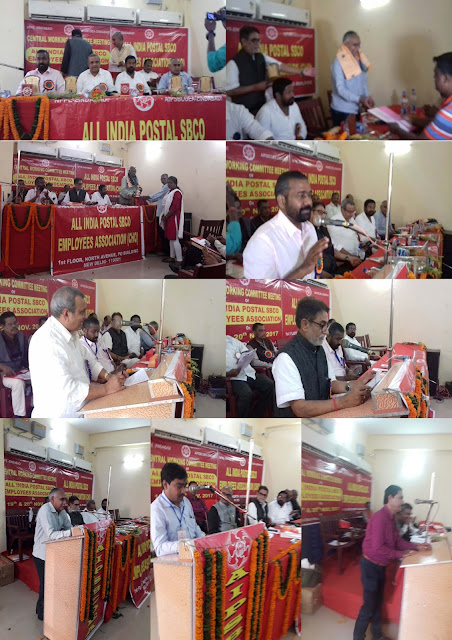 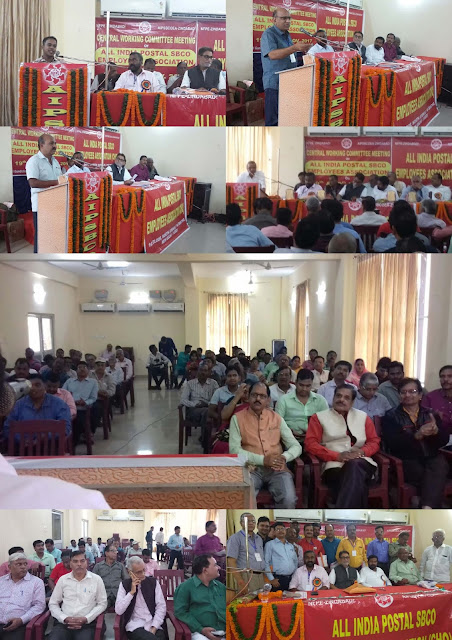 Posted by Virendra Tewary at 5:57 AM 2 comments:

Email ThisBlogThis!Share to TwitterShare to FacebookShare to Pinterest
AIPSBCOEA PAY HOMAGE TO
TRADE UNION LEADER AND EX M.P. (RAJYA SABHA) COM. SUKOMAL SEN
We paid homage to the dedicated Trade Union & Working Class Leader Com. Sukomal Sen who passed away on 22.11.2017 at 9:00 A.M. at the age of 83 years in Kolkata.
He was organisor and builder of Govt. employees movement in India. He participated in many heroic struggles of the working class movements. He visited on various occasions like Conferences, meetings and also for preparation of strike actions. The working class have lost a reliable personality and guide.
The AIPSBCOEA convey its heartfelt condolences and respectful homage to the departed soul.
Long Live Com. Sukomal Sen.
VIRENDRA TEWARY
General Secretary
Posted by Virendra Tewary at 3:19 AM No comments:

PHASE-WISE ACTION PROGRAMMES FOR SETTLEMENT OF GENUINE DEMANDS
In the Federal Executive meeting of NFPE held on 9th Nov., 2017 at NFPE Office comprising with G/S AIPSBCOEA and after a length discussion on various anti-employees issues / policies of the Central Govt. the house has been agreed to incorporate an additional items for SBCO in Charter of Demands is a great achievement for us. The programme of action/struggle for settlement of demands are as under alongwith 15 points charter of demands.

A.    Phasewise Action Programmes :
1.    Two days Relay hunger fast in front of all Divisional offices on 28th and 29th November 2017 (All Employees will wear Black Badges containing demands and will send resolution addressed to Prime Minister).
2.   Mass Dharna in front of All C.P.M.G offices on 20th December 2017.
3.    5 Days Relay Dharna in front of Parliament from 12th to 16th February 2018. (All Circles will participates in Dharna day wise).
4.     Indefinite Strike will be declared later on.
B.    Charter of Demands :
1.   Implementation of positive recommendations of Kamlesh Chandra Committee Report for GDS.
2.    Membership verification of GDS and declaration of result of regular membership verification.
3.    Filling up of all vacant posts in all Cadres of Deptt of Post i.e P.A., S.A, Postmen, Mail guard, mailmen, MTS, MMS Drivers and artisans, P.A CO., P.A. (SBCO), Postal Actts and GDS. Drop the move of amendment in P.A. S.A., P.A.CO & P.A. (SBCO) Recruitment Rules.
4.    Implement CSI, and RICT only after providing all required infrastructure including band width and stop harassment, victimization in the name of new schemes, technology induction, under contributory negligence factor and trade union victimization.
5.     Stop out sourcing privatization and Corporatization.
6.    Payment of revised wages and arrears to the casual, part time, contingent and daily rated mazdoors as per  6th & 7th CPC  and settle other issues of Casual Laboures.
7.   Implement cadre restructuring for left out categories i.e. RMS, MMS, PACO, PA(SBCO) Postmaster Cadre, Postal Actts etc and accept the modifications suggested by federation before implementation of cadre restructuring in Postal Group ‘C’.
8.   Withdraw N.P.S. (contributory Pension Scheme) Guarantee 50% of last pay drawn as minimum pension.
9.     Implement 5 days week in Postal Operative offices.
10.  Stop move of diversion of business of P.O SB Schemes to Banks (Nationalized and Private).
11.   Stop move of closure of Army Postal Service.
12.  Grant OSA and OTA to RMS staff and special allowances for P.O & R.M.S Accounts.
13.  Finalization of Recruitment Rules of AAOS IN Postal Accounts with 40% S.C.F quota as approved by DOPT.
14.   Status of Audit to SBCO.
15.   Benefit of SDBS to retried GDS employees.


Posted by Virendra Tewary at 10:49 PM No comments:


Order for grant of Special Casual Leave issued by Directorate for CWC Meeting on 19th & 20th Nov. 2017 at Puri, Odisha – An Invitation
Dear Comrades,
As all of you are aware that our Central Working Committee Meeting is scheduled on 19th & 20th Nov., 2017 at Shri Gundicha Bhakta Niwas, Puri, Odisha at the pious place of Lord "Jagannath".
This CWC meeting has its own importance being hoisted at the juncture when the Central Govt. is subsequently attacking on Postal Services and we have to decide future course of action with concluding this meeting.
It is requested that being cold season all of you are requested to join us with warm clothes and intimate the number of participants in advance to Com. Srikant Mallick, Circle Secretary, Odisha Circle (Mob. 9437309124) for proper arrangements of fooding & lodging.
The undersigned requests for large participation in this meeting for good decision on welfare of SBCO employees.
– VIRENDRA TEWARY
General Secretary
The order for grant of special casual leave is as under :- 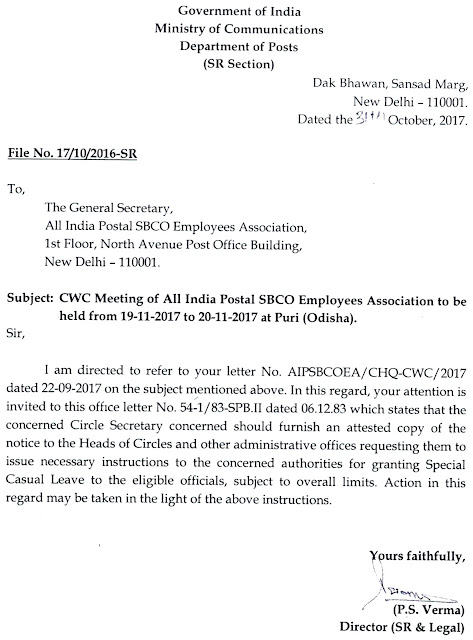 Posted by Virendra Tewary at 7:00 AM No comments:

Felicitation of Circle Secretary AIPSBCOEA U.P. Circle
A grand Felicitation of Com. J.S. Bajpai, Circle Secretary AIPSBCOEA, U.P. Circle on his superannuation at Kanpur.  Com. Y.D. Shukla, ACS-Ist has organised this function with his young team comprising Com. Udaiveer Singh, Com. Narendra Kumar, Com. Sonam and Com. Akansha alongwith Postmaster S.K. Singh.
The General Secretary Com. Virendra Tewary has also attended with Com. Balram Srivastava ACS and Com. G.P. Dubey Ex. Circle Secretary.  All of them have greeted Com. J.S. Bajpai for his dedication towards the Association. The General Secretary addressed the function. The photographs of the function are as under :-

Posted by Virendra Tewary at 6:54 AM No comments: