Clarification regarding Membership altaration/withdrawal or inclusion on new membership- regarding issued by the Department. 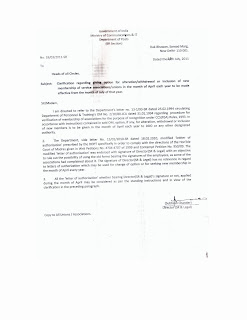 Note : - copy of DTE order on the subject above for new membership.
By - S.P.Kulkarni, President.

Posted by All India Postal SBCO Employees Association-S.P.Kulkarni, President at 8:12 AM No comments:

RESOLUTIONS ADOPTED IN FEDERAL EXECUTIVE OF NFPE HELD AT LUCKNOW ON 26 & 27 JULY, 2011.

THIS FEDERAL EXECUTIVE MEETING OF NFPE HELD AT LUCKNOW FROM 26-07.2011 TO 27.07.2011 AFTER DETAILED DELIBERATIONS ON ALL ISSUES RELATED TO THE PROPOSED INDEFINITE STRIKE FROM 2011 JULY 5TH HAS RESOLVED THE FOLLOWING:
This Federal Executive has come to the unanimous conclusion that, under the given circumstances the settlement reached with the Administration on the 25 points Charter of Demands is the best possible and fully ratify the decision of the JCA to defer the strike.
This Federal Executive further direct the NFPE & JCA leadership to take follow up action to get orders released on all the agreed items in a time bound manner.
This Federal Executive demand the Secretary, Department of Posts, to arrange another review meeting on the PLI related issues as the decentralization  of certain important PLI/RPLI functions to Divisions has been done contrary to the sprit of the discussions held on 01.07.2011. Review meetings may also be arranged with the unions of Civil Wing and Postal Accounts as assured during the final round of discussion.
Regarding the formation of the Committee to review the Speed Post hubs and first class hubs (L 1,L 2) the Federal Executive is of the unanimous view that the induction of new technology and consequent changes in the mail processing should not lead to indiscriminate closure/merger of existing RMS Offices and interest of employees should be protected. The delay in public mail should be avoided and speedy delivery of articles should be ensured.
The Federal Executive further resolve that if any unilateral violation of the assurances given to the Staff Side take place then NFPE and JCA shall organize agitational programmes.
M.Krishnan
Secretary General NFPE
- Posted by
Appanraj S General Secretary
Posted by Appanraj S - Vice President at 6:54 AM 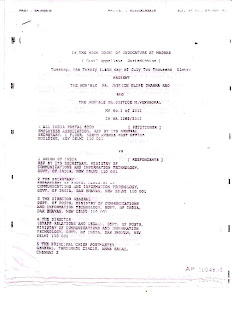 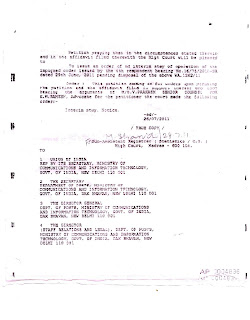 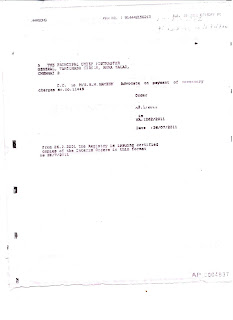 APPEAL TO ALL CHQ/CWC COMRADES-

Dear Comrades,
You are aware about the Rival AISBCE Unions one item program to withdraw the Recognition of this Association is totally antidemocratic and against SBCO Staff interest. One side Staff is suprssed by Authorities at all level. Department has no any constructive proposal for SBCO in Future. SBCO staff is facing Punishments under Different Fraud cases. For routine work no any Rules and Procedure adopted but the  same Rules are used to punished the staff. There are burning issues in all circles. Not a single authority is in favor of SBCO staff. Even So called AISBCE Unioin is fully supporting to all activities which are totally against SBCO working to authorities. Still  not signle authority is considering SBCO issues. So called AISBCE union claiming as it is big union in SBCO cadre it is not considered for ant All India issues by Department. Being non federal it has not any All India Policy. Since 4/5 years no all India meetings with high rank officers . Not a single reply received by it from the Department on Policy matter or on matters raised by them.  in their circulars only letters sent by CHQ to Authorities are published. Not a single letter from Department is their . Still they are proud of Recognition. Not a single union or Federation (NFPE/FNPO/BPEF ) is supporting them. Being a non federal union though they are Recognized they cannot aproach at Department/Govt level for their issues.
Comrades. we are fighters. we dont depend on others for our survival. We can protect our staff in any condition. This Recognition issue will be handled by this CHQ properly. we will face it CHQ level with your moral support. Your faith & support is sufficient for us to face this issue at any level. we will succeed to retain our position confirmed.Dont fear or Confused.
On the other side  newly recognized our Association having support of Strongest NFPE federation. Having involved with Firm all India policy to maintain identity of SBCO as Accounting Cadre. Fighting against Department for Staff issues. Having 15 years experience to work without recognition but functioning with Federations which are fighting for staff interest. Fighting for safe future of SBCO staff. Facing so many court cases against Recoveries/ Punishments in different courts to support SBCO staff.Getting results from Govt/Misistry level in so many isues, Having firm policy and program with support of Federations for its Firm policy.
All SBCO STAFF is fully aware about the fighting spirit of this association. Other side so calledAISBCE union having only one program to withdraw Recognition of our association granted by the Department following Departmental Procedure. But by misusing status of working at CO /RO level this union office bearrers are pressurising SBCO staff for membership and reported wrong figures and issue of Recognition of this asociation is hilighted. Staff is misguided and misleaded by them. They are making propagenda of this issue that the Recognition of association is Withdrawn. We are not bothered about it. The matter will be handled by this CHQ.
Comrades we are struggling for SBCO issues since 1993 TBOP/BCR issues which are opened the doors to SBCO to reach up to HSG-I scale at the time of Retirment. Up to 1993 this so called AISBCE union was helpless to get  any benefit either as Postal operative staff or as Audit staff. But it was our efforts to bring SBCO with them. Wheather we are recognized at that time. We are experince to fight with authorities/Govt for staff interests. we are not depend on Recognition for saving interests of the Staff. Also we are hankfull to the staff who supported and joined with us in our mission.
Comrades your support to maintain our Position by all means is required. Send Maximum funds to CHQ by name  to S.P.Kulkarni, President 1447 A ward Shivaji peth Kolhapur-416012 (Mh) or To Shri. S Appanraj General secretary SBCO Madurai H.O. ( T.N). Contact for Details to CHQ.
Make aware to our staff about the facts as how this AISBCE union which has no any statis at Departmental Level, Not supporting staff issues but only getting advantage of recognition issue. It will ruine SBCO bysuch anti staff interest policy.
Comrades, Be carefull for our existance and be ready to save our self respect & existance by supporting this CHQ by all means. We are sure to maintain our position at DTE level. We will win !!!!!!!!!
-By S.P.Kulkarn, President.
Posted by All India Postal SBCO Employees Association-S.P.Kulkarni, President at 8:56 PM No comments:

RECOGNITION ISSUE of this Association.

Comrades,
So called AISBCE union leaders are more interested to withdraw the Recognition of this association by hook & crook.Figures call under RTI by are highlighted again & again with support of Kolkatta Cort case directions to the Department to review the figures.Rumors are spread again & again to misguide the members. It will be better if they use such will for the constructive work for SBCO. They must self relization what they are doing? There are burning issues in SBCO. The future of SBCO is in dark. SBCO staff is suppressed by all authorities at local levels. Without supporting to staff and save their future this AISBCE union leaders are interested  only to De recognized our association. They are feared about their existence. Reports received  from all circles our membership is increasing. More over The figures collected by AISBCE union under RTI are changed when our association has called Figures under RTI information recently. The revised figures received to our CHQ are different & more than the previous information.This situation Department is unable to take any decision to De recognized AIPSBCO association as appealed by so called AISBCE union. But this fact is clear that AISBCE  union has no any all India policy, future plan for SBCO. They are only interested to keep their leadership . But they are playing game with SBCO's future. Now it is time to give proper reply by the SBCO members. to them. They must  be warned to stop their anti staff activities and to concentrate on their union activities to save SBCO staff and its future by solving SBCO's burning issues. They should stop to misguide the staff by spreading rumors.
Recognition of AIPSBCO association will not effect by any means. This CHQ will face each and every issue at any level to protect our staff and associations status as we have experience of 15/16 years to fight without recognition as staff faith and support is with us for our existance.  But they must think about their stability now.
Staff feelings are with us.Keep in contact with this CHQ for confirmation of any news about SBCO as this association is part of JCA with NFPE federation at All India level policy where AISBCE union has no any footage at DTE Govt. level for all India Level policy but this association is with all these with Recognition also with firm plans, policy and support of all unions, stronest NFPE federation.
by S.P.Kulkarni, President

Posted by All India Postal SBCO Employees Association-S.P.Kulkarni, President at 7:05 PM No comments:

Action Taken Report circulated by DoP before talks on 30.06.2011

The Action Taken Report on all the 25 Demands in our Charter was circulated to us before the talks on 30th June, 2011. The Official Minutes is yet to be received by us. We have made many improvements to the position stated in the ATR by the Department. As soon as the Final Minutes are received, the same will be placed in the website. However, for the information of our members, full text of the ATR as mentioned above is furnished below. The text will be available by clicking the link below:
https://docs.google.com/viewer?a=v&pid=explorer&chrome=true&srcid=0BxNEVCvnmZdeNTc0NGI5YzctYzVkMS00ZTcxLThjMzEtYzY4YmE4OTA0NmQx&hl=en_US
by- S.P.Kulkarni, President.
Posted by All India Postal SBCO Employees Association-S.P.Kulkarni, President at 6:39 PM No comments:

Comrades,
Indefinite Strike from 5th July deferred. Positive settlement on the issues. Details will be published in the NFPE Website. Visit - www.nfpe.blogspot.com for details.
-S.P.Kulkarni, President.
Note - SBCO issues as per Item no-14  were discussed which were included in Charter of Demand for Strike as - 1) to stop recoveries fopr contributory negligence, 2) Divilization of SBCO 3) Harassment of SBCO staff 4) Necessity of SBCO work before  core banking with some hope full discussion with directions to all by DTE.
-S.P.Kulkarni, President.
Posted by All India Postal SBCO Employees Association-S.P.Kulkarni, President at 7:33 PM No comments: