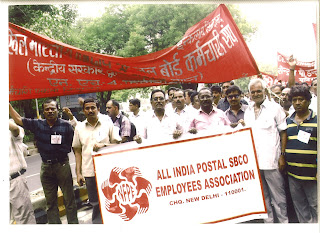 Posted by Appanraj S - Vice President at 9:35 AM No comments:

Posted by Appanraj S - Vice President at 9:09 AM No comments:

RAISE OMs and RUN TO SOs

To
The Secretary,
Department of Posts
Dak Bhawan,
New Delhi- 11 0001

It is brought to this union that the staff of SBCO wing are utilized by and large for settlement of objections raised by them. As an example, a copy of e-mail letter of the SSPOs Tirunelveli Division ( Tamilnadu) is forwarded. Through the said letter, one PA SBCO Tirunelveli HPO has been directed to visit Tirunelveli Town S.O and settle 400 SBCO OMs within two days.

In the para 13 of SBCO control procedure, it is categorically said that it is the personal responsibility of the Postmaser and the Ledger Clerk to ensure that objections raised by Control Organization are got settled by supplying the wanting information and particulars.DPM/APM in charge of SB branch is required to see that replies to the objection and wanting particulars are furnished within a fortnight at the earliest. Manner of settlement of objections is also stated with specific guidelines under para13.

By violating all these settled procedures, directing the SBCO official is nothing but  to  threat  SBCO staff not to raise objections further. Like this, the staff  have been engaged errantly for many other purposes and as a result the very purpose of control organization is defeated.

It is therefore, requested to look into the matter and cause appropriate instructions to all concerned to stop such practices of using SBCO staff  in operative side.
A line in reply is solicited.

Posted by Appanraj S - Vice President at 1:50 AM No comments:

Merger of DA 50% with Basic pay is denied.

Sixth Pay commission anomalies are not sorted out.

Pay Bond system is not advantageous to Employees.

Like public sector employees wage revision   - once in Five years   -   Our Demand.

No compassionate appointments in Central Govt service as allowed in Railways.

CONFEDRATION is taking efforts to forge total unity of all central government  employees including Railways and  Defence to win over the demands.

To realize our demands, We, SBCO employees involve ourselves in all programmes.
Participate  en masse in March to Parliament – 26th July 2012

revenues from financial services grew by 20.8 per cent

POSTAL DEPT’S DEFICIT IN 10 YEARS
Mirroring signs of revival, the Department of Posts (DoP) has registered the highest decline in deficit in more than 10 years at Rs 550.73 crore in 2011-12 on the back of increase in revenues, mainly from financial services.
Total revenues of the department in 2011-12 rose by 13.62 per cent to Rs 7,910.51 crore while expenditure stood at Rs 13,705.4 crore, leaving a deficit of Rs 5,794.89 crore.
In the previous fiscal, DoP had revenues of Rs  6,962.33 crore and expenditure of Rs 13,307.95 crore, reflecting a gap of Rs 6,345.62 crore.
DoP's deficit had jumped over 80 per cent to 6,641.30 crore in 2009-10 from 3,593.09 crore in 2008-09 due to implementation of the Sixth Pay Commission's recommendations.
“In the last one year we have developed an integrated strategy to make India Post, commercially and socially relevant. The financial performance of the last year indicates that we have succeeded to an extent. But a lot more need to be done,” Minister for Communications and IT Kapil Sibal told the news agency.
According to the Financial Performance report prepared by Department of Posts for 2011-2012, revenues from financial services grew by 20.8 per cent at Rs 4,304.07 crore in 2011-12 compared to Rs 3,562.77 crore in FY'11.
Revenue from postal operations grew by 6.08 per cent to Rs 3,606.44 crore in 2011-12 from Rs 3,399.56 crore it registered in FY'11.
Sibal said that he is expecting revenue of DoP to grow by 20 per cent in the current financial year.
“This financial year we are targeting revenue increase of plus 20 per cent. I am happy that India Post is moving in the right direction. Now we need to increase our speed,” he said.
DoP has appointed Boston Consulting Group to prepare an appropriate business structure for the emerging and premium services of India Post.
The postal department has floated expression of interest to appoint a consultant for preparing detailed project report (DPR) of its ambitious Post Bank projects and this report is expected to be finalised by end of this calendar year.
“The Post Bank project will rejuvenate financial services offered through post offices,” Sibal said.DoP has already announced to set-up 1000 ATMs across country as part of its financial services.
Sibal has also asked DoP introduce premium logistics services in select 80 to 90 cities within six months to tap the expanding e-commerce market in the country and enhance its revenue by 15 per cent.
Press Trust of India / New Delhi Jul 05, 2012,

Posted by Appanraj S - Vice President at 12:00 AM No comments:

It is reported that the Postmaster Jhalawhar H.O is causing unwarranted delay to relieve Shri. L.K.Chauahan, PA SBCO Jhalawhar H.O who stand transferred to Tonk H.O under Rotational orders. The action of the postmaster has adversely affect the studies of the children of the official since the academic year had already started. The representation of the official to the Divisional Supdt,  Kota  was also not availed of. It is therefore requested that suitable instructions may please be given to the postmaster for immediate relief of the official.

A line in reply is solicited.
With regards.