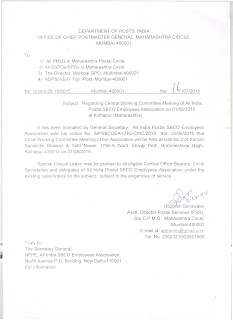 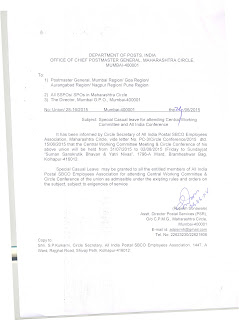 Posted by All India Postal SBCO Employees Association-S.P.Kulkarni, President at 2:51 AM No comments:

Email ThisBlogThis!Share to TwitterShare to FacebookShare to Pinterest
BULLETIN NO. 02
BE AWARE AND STANDUP AGAINST ANTI-WORKER, ANTI-EMPLOYEES POLICY OF GOVT. OF INDIA 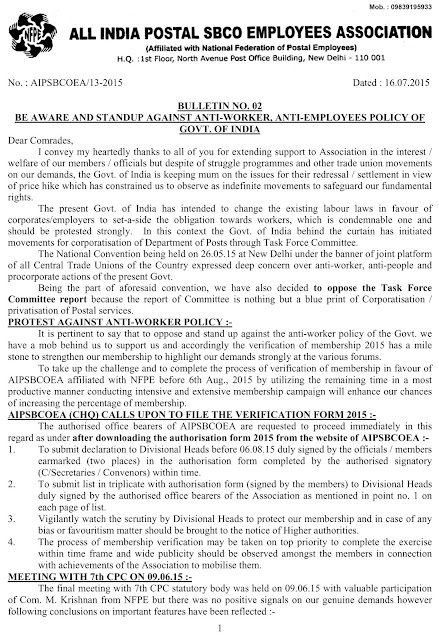 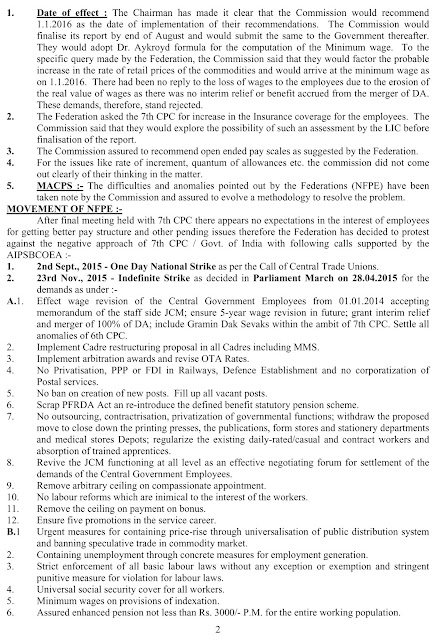 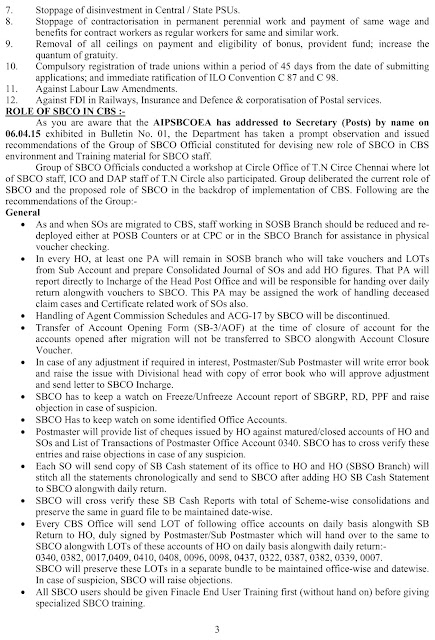 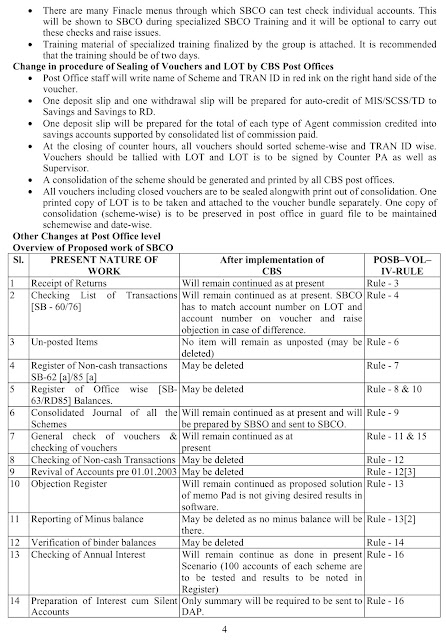 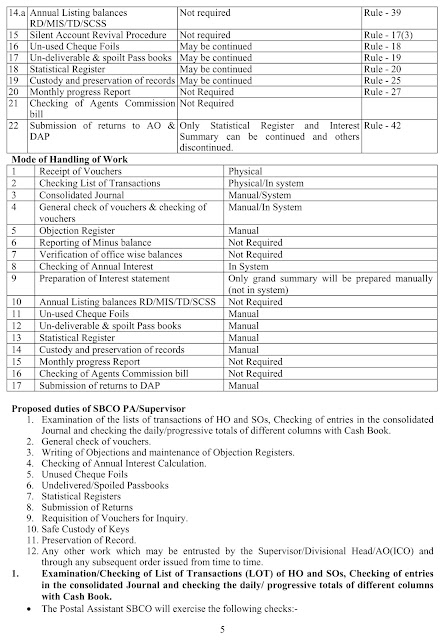 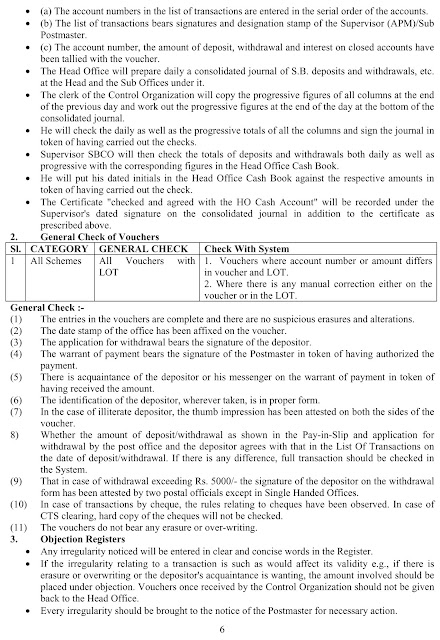 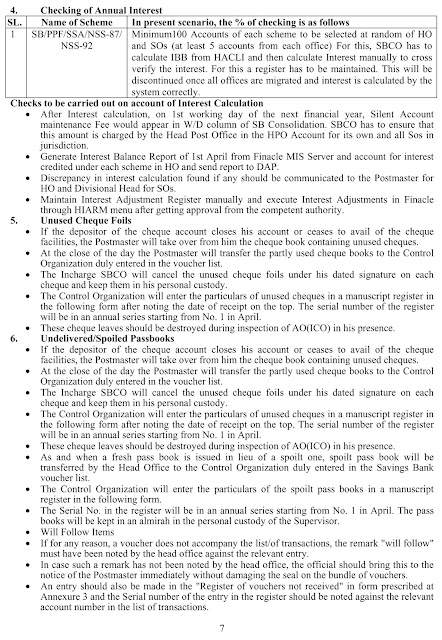 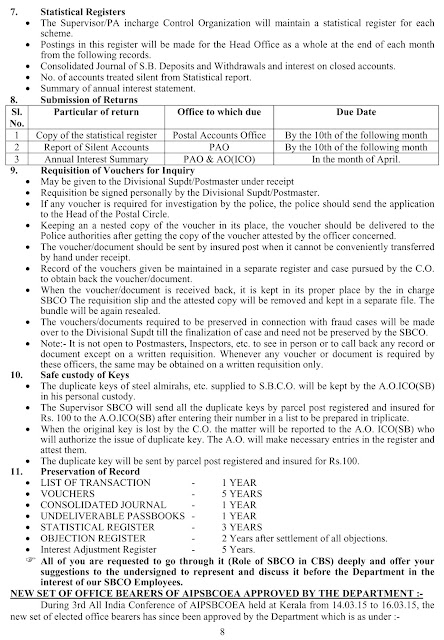 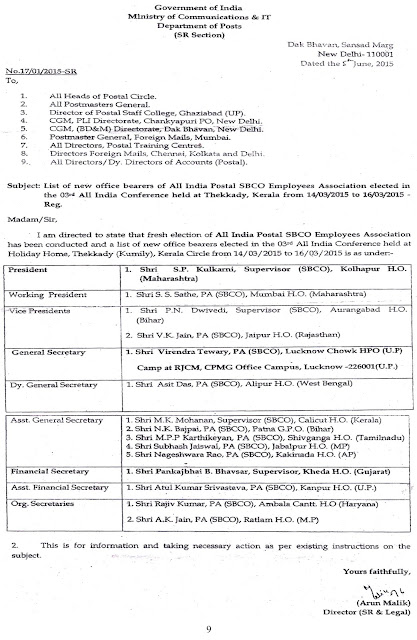 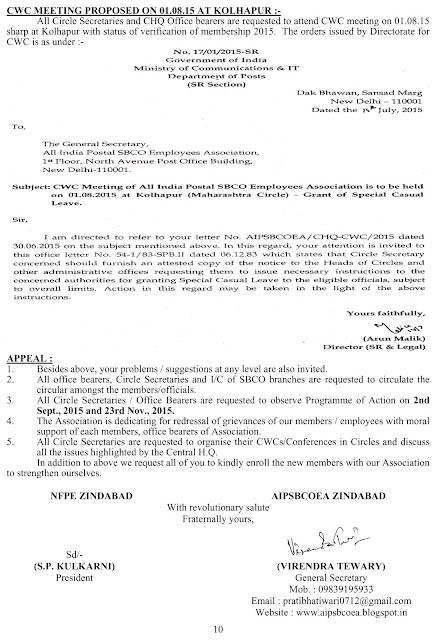 Posted by Virendra Tewary at 1:04 AM No comments: 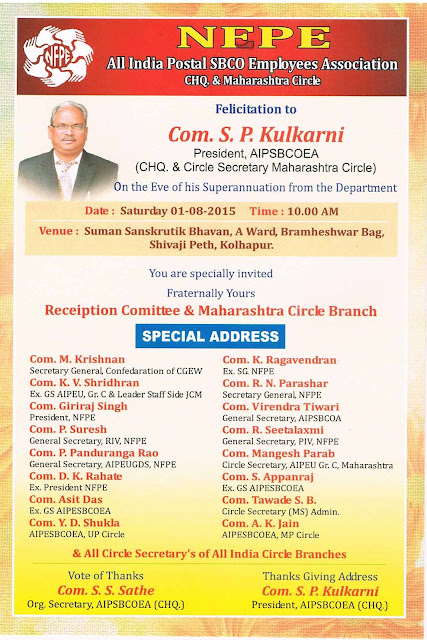 Posted by All India Postal SBCO Employees Association-S.P.Kulkarni, President at 12:51 AM No comments:

we are happy to hold this conference. We are eager to welcome you all in this holy pilgrimage welknown as South KASHI ( Varanasi) having holy places as Mahalaxmi Temple, Jyotiba Temple at 12 Km. from City. New Palace, Museums, and historical Fort at Panhala. and so many  historical places to visit.

Kolhapur is situated on Poona Goa line. CST Kolhapur ( Kolhapur Station) on Railway root. Miraj Junction is 50 Km. away from Kolhapur. One hour from Miraj to Kolhapur by Bus or by Train. From Poona by road Kolhapur is 230 Km and 4/5 hours by Road bus. From Bombay by Train or by Bus 430 Km away. Both available.

By Bus stand or by Railway station Venue / hall is 4 km near the Mahalaxmi Temple in the heart of City. By Auto Rs. 40/50 will be charged. Arrangements to pick up from  both stations will be made. By Taxi or vehicle for those who will receive late at night.

We are eager to welcome you for this occasion as it will be a mile stone and historical conference as it is to be held at the place where this association is founded in Kolhapur Division by Com S.P. Kulkarni with his 4/5 followers in 1997 and struggling in adverse condition brought it up to Recognition in these 18 years with his non stop efforts with developing it in all circles. Now he is retiring shouldering its responsibility on our shoulders. It will be our duty and responsibility to accept it.  His Continuous struggle at all level to survive SBCO with its identity as Audit and separate identity  with minimum support & limited means since 1997 has reached at its fruitful results as fixing SBCOs Role in CBS recently with accepting Control of SBCO to Accounts officer, 4th to 7th CPC meetings proving SBCO’s Importance.

Now we have opportunity to honor him at his Retirement. We invite you to attend with maximum and opportunity to welcome you to such holy place. This will be grand function as all INDIA  leaders of NFPE, all General Secretaries,  EX-Secretary Generals as Com, M. Krishan, S/G Confederation of C.G. Employees, Com, K.V Shridharan, Com,. Raghavendran, Com, R. N. Parashar S/G NFPE, Com., Giriraj Singh President NFPE, D. K. Rahate Ex- president NFPE, and all cadres General Secretaries P-III, P-IV, RMS III & IV, with all Circle Secretaries of Maharastra Circles will grace this occasion. It will be the historical function. We hope you also will not miss this occasion to share the mission. This will be the first program of this association in Maharastra. This is chance to observe the activity of this association at all India level with its strength & position and policy & future plans for the betterment of SBCO  with its bright future at all India level.

WE INVITE YOU TO ATTEND AND GRACE THIS FUNCTION. SPECIAL C.L. ORDERS ARE ALREADY ISSUED TO ALL DIVISIONAL HEADS and all units. WE ARE EAGER TO WELCOME YOU ALL.


NOTE-DALEGATION FEE RS.600/- per. Arrangements for family if informed in advance- Inform  in advance so as to manage your comfortable stay.
Posted by All India Postal SBCO Employees Association-S.P.Kulkarni, President at 6:38 PM No comments:

RECOMMENDATIONS PROPOSED FOR NEW ROLE OF SBCO IN DOP FINACLE -Department has called views/comments/suggestions on it before 06.07.2015& circulated by all circles to SBCO & all concerned.The role of this association is important in it  as it is finalized by efforts of association considering its views as AUDIT Role of SBCO. 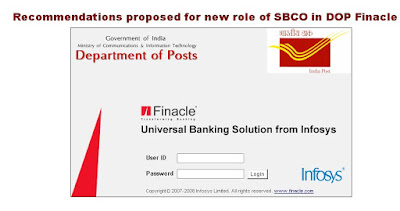 Group of SBCO Officials conducted a workshop at Circle Office of T.N Circe Chennai where lot of SBCO staff, ICO and DAP staff of T.N Circle also participated. Group deliberated the current role of SBCO and the proposed role of SBCO in the backdrop of implementation of CBS. Following are the recommendations of the Group:-
General
Change in procedure of Sealing of Vouchers and LOT by CBS Post Offices
Other Changes at Post Office level
Overview of Proposed work of SBCO
Mode of handling of work
Proposed duties of SBCO PA/Supervisor
Examination/Checking of List of Transactions (LOT)of HO and SOs,  Checking of entries in the consolidated Journal and checking the daily/ progressive totals of different columns with Cash Book.
General Check of Vouchers
General Check:-
The entries in the vouchers are complete and there are no suspicious erasures and alterations.
(2) The date stamp of the office has been affixed on the voucher.
(3) The application for withdrawal bears the signature of the depositor.
(4) The warrant of payment bears the signature of the Postmaster in token of having authorized the payment.
(5) There is acquaintance of the depositor or his messenger on the warrant of payment in token of having received the amount.
(6) The identification of the depositor, wherever taken, is in proper form.
(7) In the case of illiterate depositor, the thumb impression has been attested on both the sides of the voucher.
8) Whether the amount of deposit/withdrawal as shown in the Pay-in-Slip and application for withdrawal by the post office and the depositor agrees with that in the List Of Transactions on the date of deposit/withdrawal. If there is any difference, full transaction should be checked in the System .
(9) That in case of withdrawal exceeding Rs. 5000/- the signature of the depositor on the withdrawal form has been attested by two postal officials  except in Single Handed Offices.
(10) In case of transactions by cheque, the rules relating to cheques have been observed. In case of CTS clearing, hard copy of the cheques will not be checked.
(11) The vouchers do not bear any erasure or over-writing.
Objection Registers
Any irregularity noticed will be entered in clear and concise words in theRegister.
If the irregularity relating to a transaction is such as would affect its validity e.g., if there is erasure or overwriting or the depositor's acquaintance is wanting, the amount involved should be placed under objection. Vouchers once received by the Control Organization should not be given back to the Head Office.
Every irregularity should be brought to the notice of the Postmaster for necessary action.
Checking of Annual Interest

Checks to be carried out on account of Interest Calculation
Unused Cheque Foils
Undelivered/Spoiled Passbooks
Statistical Registers
Submission of Returns
Requisition of Vouchers for Inquiry
Safe custody of Keys,
Preservation of Record
- BY- S.P.Kulkarni, President ( CHQ)

Posted by All India Postal SBCO Employees Association-S.P.Kulkarni, President at 6:37 PM No comments: